The 91st renewal of the National Amateur Pheasant Championship concluded on Sunday November 13th, with judges Scott Kermicle and Chris Sellers naming Pendy's Good Grace the 2022 Champion. Grace is owned and handled by Matt Pendergest of Georgetown, Ky., and successfully defended her title from 2020 and 2021, making her third consecutive title in this stake. Erin's Southern Comfort, owned by Sean and Sean Patrick Derrig and handled by Sean Patrick was named runner-up.

The National Amateur Pheasant Championship is the second oldest of the 16 National Amateur Championships, following only the National Amateur Quail Championship. A comprehensive review of the history of the National Amateur Pheasant Championship was included in the report of the championship in 2020. As a brief review, the inaugural running was held in 1933 in Oneida, New York, then moved to Buffalo, New York until 1946 when it moved to Cranbury, New Jersey until 1952. It was held at Indian Gap, Pennsylvania for one year and Woodland, California for one year and then to Baldwinsville, New York until 1963 when it moved to Killdeer Plains Wildlife Area near Harpster, Ohio. From 2010 through 2020 it was held at Dresden, Ohio. Due to the decline in entries at the Dresden location the decision was made to move the trial two years ago. Originally plans were to run the Championship at Pyramid State Park in Pinckneyville, Illinois from November 18th through the 21st. Despite the fact that dates were originally granted for the trial at that area and for those dates, the Illinois Department of Natural Resources later rescinded the dates due to deer hunting season. After some juggling of club dates at the Central Kentucky Wildlife Management Area were made available to host the trial in 2021 and it may have now found its new home.

Judges for this renewal were Scott Kermicle of Dawson Springs, Kentucky and Chris Sellers of Selmer, Tenn. Both Scott and Chris are experienced judges. Scott recently retired from managing a hunting preserve in northern Kentucky and Chris trains and handles his own dogs at various venues in the south. They gave each dog their full attention and the results were well received by all. The AFTCA and the participating members putting on the trial appreciate their service to the sport.

Special thanks also go out to Pam Tucker for arranging the lunches and snacks for the dog wagon, including making delicious sausage sandwiches on French toast. Thanks to Buster Tucker and Tim Hammons for releasing pheasants and assisting with marshalling. Thanks to Kristine Hammons and Matt Pendergest who also assisted with marshalling as needed. Special appreciation also goes to Piper Huffman for handling the ad for the trial and the drawing, as well as many other details.

As always, these trials would be nearly impossible without the support of Purina and Greg Blair. Purina dog food was awarded to both the winner and runner-up and were received with great appreciation to Purina.
The Winners
Pendy's Good Grace was braced with Crouse's Equalizer in the last brace of the day on Saturday. Released from the old house breakaway, both dogs were shown at the far end of the first bottom on impressive opening casts. The pair crossed the creek on the far left toward Bearwallow woods. Grace returned shortly afterwards, but Equalizer continued on in that direction and would be seen no more. Scout called point for Grace at 6 with a nice covey resulting for the mannerly female. Grace was swinging nicely to the front and responding to Pendergest. A second quail find resulted in the feed strip along the Agee house. Released from this at 20, she went 300 yards and slammed on to point. A pheasant was produced for the stand, giving Pendergest some relief that she had the necessary Pheasant find to contend for the title. Grace was released from this and took the left side of the tree line that intersects the Agee bottom. Going up the opposite side of the tree line, she was pointing again. Her fourth was again a covey of quail. Grace was pointed out rimming the Drive Inn field and disappeared to the right front. At 32 the call of point came from scout near the Clubhouse woods. Number 5 was a nice covey of quail, and the find was picturesque. Across the blacktop and back to the North side, she continued with her strong forward pattern, rimming one field after another. A short absence from 48 to 55 occurred, but she showed the front to finish strong in the Dewey bottoms.

Erin's Southern Comfort was braced with Crouse's Quiet Man and started from the Mailbox breakaway. Man and Comfort were both right off breakaway, with Comfort coming to Derrig at 6 near the Drive Inn field. Man would not be seen again. Comfort scored at 9 on a rooster pheasant near the Clubhouse woods. Style was straight up tail and high head with manners excellent. Comfort was in tune with Derrig, coming back to check in periodically after his bigger swings. Comfort was out of pocket at the Old House and returned from behind as we reached Bearwallow woods. Derrig showed him on a big swing around the feed strip just past Bearwallow woods and then was gone for a spell, before coming to Derrig at the Agee house. He had to be ridden for as he swung to the left toward the Drive Inn field as the course turned to the right at the Goose Pond woods. Comfort was absent for a spell after this but returned from the front at 53. Point was called by Derrig shortly after pickup time with Comfort scoring on a covey of quail to secure the runner-up title.

THE RUNNING
Casey Creek Crystal Ice (Tucker) with Dialed In (Pendergest). Breaking away from the clubhouse on Saturday morning in a cold rain, Crystal was available through the Dewey bottoms, while Dialed In was not seen until 8 just before crossing the concrete culvert. At 10 point was called by scouts and Crystal was pointing with Dialed In backing. All was in order with a running Pheasant. At 12 a Pheasant was in the air and Dialed In was harnessed. Crystal scored on quail at 18 and after conferring with judges, Tucker leashed Crystal to end the brace.

Morgan's yellow Ledbetter (Morgan) with Storm's End (Pendergest). Both dogs were gone to the left off breakaway, with Ledbetter returning from the rear at 8. An encounter with a Pheasant at 9 resulted in Morgan being handed the tracker. End showed to the front at 15 and proceeded to make some nice casts through the bottoms past the Old House location and past Bearwallow woods. End was credited with a good quail find at 32 on the pine tree line before the Agee house. Two minutes later she added a nice find on a running Pheasant. Rougher weather had set in with rain turning to ice at times as temperatures were in the low thirties with significant wind. Scout was calling point at 41 and a long ride back to the dog ensued with quail being produced for a third find. End cast to the left front as the course swung to the right around the Goose Pond woods and would be seen no more under judgement.

Little More Shine (Hammons) with Blue Eyed Dream (Turner). Shine scored nicely on quail at 8 and was seen sparingly afterwards with the tracker requested at 38. Dream was fresh off of her runner up placement in the Kentucky Open Shooting Dog Championship and performed well for Turner throughout the hour, but without the benefit of bird work.

Awakened (Pendergest) with Erin's Grey Justice (Derrig). Both dogs were showing well early on and searching the likely spots with no results. Justice crossed the road at the round woods and was ridden for but not returned. The tracker was requested at 40. Awakened was staying in contact and negotiated the back turn of the first course. After crossing the blacktop road, she made a big swing toward the Agee house and handler road to the front and called point. A cove of quail was produced here. She finished near the south trap range, but without a Pheasant contact.

Erin's Country Rebel (Derrig) with Crouse's White Dragon (Schalk). Breaking from the Mailbox, both dogs were shown to the front at the Drive Inn field and point was called by Derrig for Rebel at 9 with a large cove of quail produced. Manners were excellent for the handsome pointer. Dragon was missing at this juncture but retuned to Schalk at the Old House location. Both dogs were shown behind Bearwallow Woods, but that would be the last seen of Dragon. Rebel continued with a strong forward pattern and a second stand at 58 resulted in an unproductive.

Pendy's Good Grace (Pendergest) with Crouse's Equalizer (Crouse) has been detailed earlier.
Sunday morning was cold with a slight drizzle, but an improvement over the cold rain of Saturday morning.

Crouse's Tennessee Game Kate (Crouse) with Erin's Rebel Attraction (Sheehan). Attraction was showing nicely early and went out the right corner past the concrete culvert at 12. He returned to the front at 23 in the big bottom. Point was called from a distance near the sow pond. A relocation was required on running quail and a jump at flush and shot ended Attraction's bid. Kate was biddable for Crouse and hunting the likely spots but could not make game contact today. She finished strongly headed toward the Drive Inn field.

Imagine (Pendergest) The bye dog was released from the Old House breakaway and was shown crossing the far front tree line. He was standing with high head and tail when the party got to the crossing. A Pheasant was produced here with all in order. Released to the left he was shown on a good swing and reappeared in front at 9. At 14 handler's hat was in the air and another Pheasant was produced along the pine tree line before the Agee house. A stand at 23 produced only feathers from a quail kill. Another stand at 25 resulted in an unproductive. Imagine was last seen at 38 and returned from the front shortly after the tracker was handed off to end the hour and conclude the stake.
Berea, Ky., November 11
Judges: Scott Kermicle and Chris Sellers
NATIONAL AMATEUR PHEASANT CHAMPIONSHIP [One-Hour Heats] - 16 Pointers and 1 Setter
Winner-PENDY'S GOOD GRACE, 1664858, pointer female, by Reloaded-Dialed In. Matt Pendergest, owner and handler.
Runner-Up-ERIN'S SOUTHERN COMFORT, 1693833, pointer male, by Erin's Lone Star Law-Erin's Irresistible Jane. Sean Patrick Derrig & Sean Derrig, owners; Sean Patrick Derrig, handler. 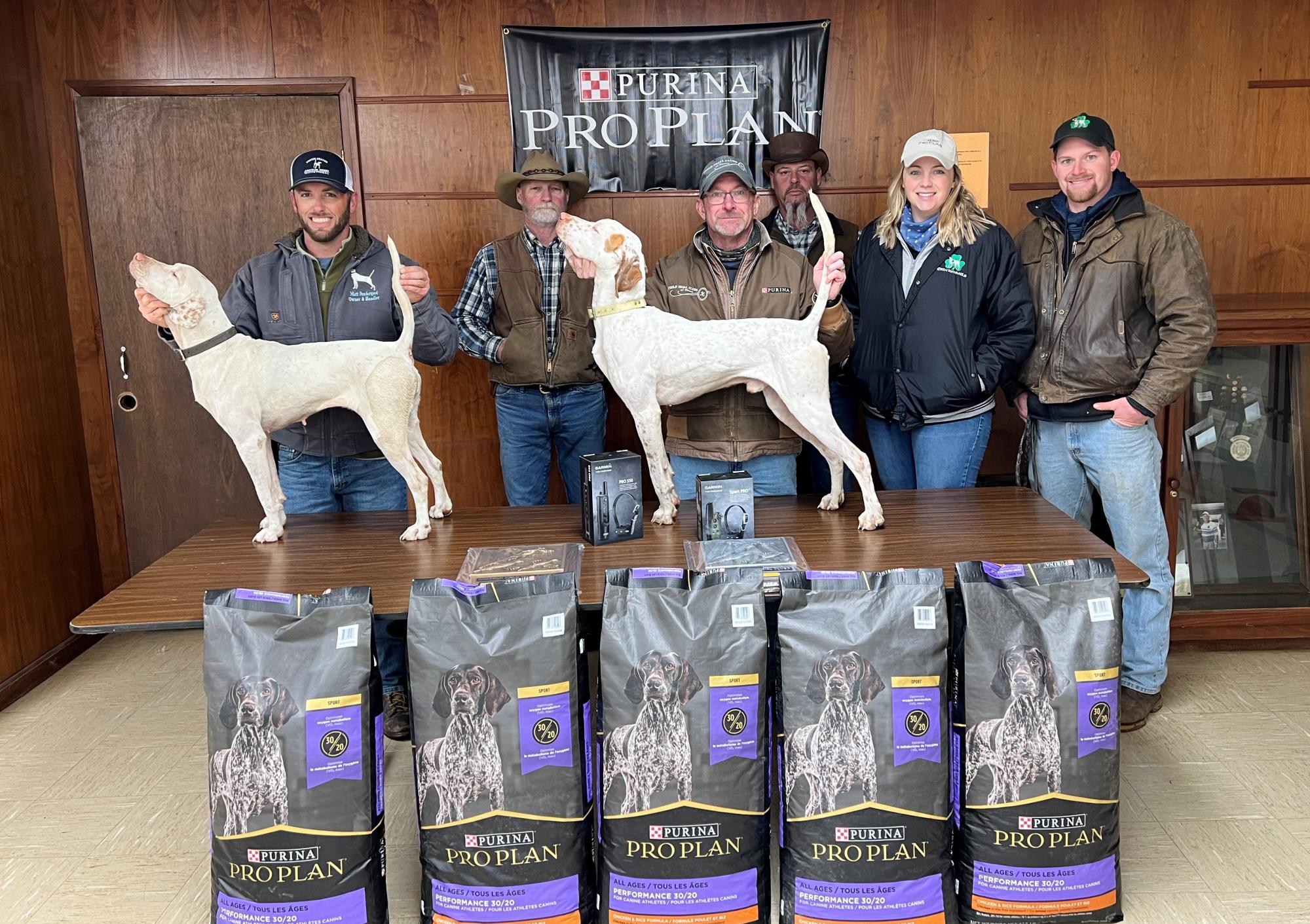