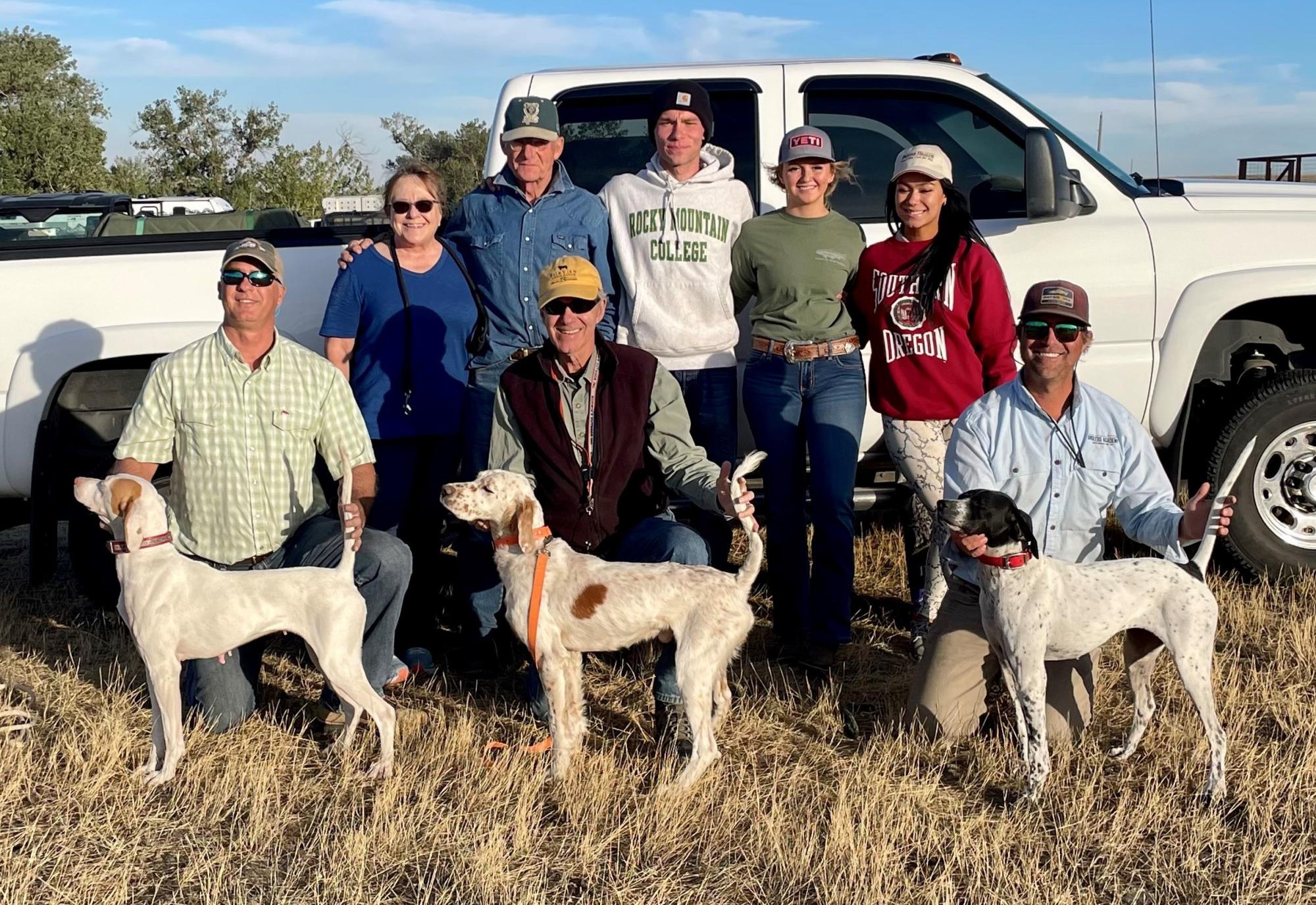 The Big Sky Field Trial Club held its inaugural U. S Complete Shooting Dog Association trial at the Table Rock Ranch in Barber, Mont., on September 23rd. After many years of holding some of the most prestigious amateur and open horseback trials in the west, the Club responded to a perceived demand for walking trials to engage more and younger dog handlers in the sport. If the first trial is any indication, the demand is certain rather than just perceived. Twenty-eight dogs were entered and five first time handlers participated. With a one-day limit for the trial, the Open Puppy stake was canceled but the day was full with eight Open Shooting Dog entries, twelve Open Derby entries and four Amateur Gun Dog entries.

Table Rock Ranch supports good native populations of sharptail grouse, Hungarian partridge and pheasants. There were no birds released. A raging west wind limited bird movement in the CRP and the powder dry conditions made scenting difficult but there was sufficient bird contact to elevate the best dogs to placements.

Judging all stakes were John Todd and Isaiah Todd of Willow Creek, Mont. The grandfather/grandson tandem were knowledgeable, attentive, helpful and pleasant. Both have spent years watching the best bird dogs in the world. Big Sky was fortunate to have them and appreciate their service.
First place in the Open Shooting Dog went to Touch's White Rose, a beautiful white and lemon pointer female owned by John McIltrot and Alex Rickert. Alex handled her in the stake. Rose had a nice race with a stop to flush and a back.
Second place went to Sweet Grass Skeeter, a setter male owned and handled by David Huffine. Skeeter had no bird work but had a strong, forward race. He shortened near the end of the stake running into the face of a 30 mile an hour breeze but finished acceptably.
Third place went to first time field trialer John Hudgens and his white and black pointer female, Seranoa's Rebel Margarita. Rita was birdless but looked good on the ground and finished well.
A "special" unannounced "Find of the Day" award went to Bill's Yellowstone Pride, a pointer male handled by first timer Keith Anderson. Keith's dog had a wonderful broke find on a covey of huns but had a breach of manners that precluded him from placing. Austin Turley donated a tracking collar for the performance and Isaiah Todd gave the award which was well-received by those in attendance.

The Open Derby Stake was likely the most competitive draw of the trial but Tower Hill's Bright Star (Betty) dominated the stake with two finds and an animated race to take first place. Betty is owned by Taylor Todd and was handled by John McIltrot. Betty showed that her placement was not a fluke by winning the horseback all-age derby the following day.
Second place went to Shrew, a black and white pointer female owned and handled by Bryce Daviess. The petite Shrew was a gallery favorite. Her range was limited but her style and charm were not. She had several backs of her bracemate and thoroughly enjoyed herself throughout.
Third place went to Sweet Grass Skipper, another setter male owned and handled by David Huffine. Skipper had a big race off of the breakaway and looked good going. He slowed as the course turned west and into the wind but finished well.

The Amateur Gun Dog Stake attracted four entries which allowed only two placements. Bill's Yellowstone Pride won the stake with Northwoods Cosmic Ray, a tri-colored setter handled by Nick Allen taking second. Both were first time handlers.
BSFTC is extremely pleased with the response from the new handlers and looks forward to spring trials with more time allocated to the walking trial. We know that several likely participants were guiding and could not attend the fall event and we look forward to their future participation.
Table Rock Ranch is owned by the Rickert family and the family is the lifeblood of this trial. They not only allowed us to use the ranch but provided lunches, transportation of dogs and handlers, and good companionship. BSFTC extends its utmost thanks to the Rickerts for their contributions and commitment to the Montana field trial community.
We also thank Purina (Greg Blair) and Lion Country Supply (Eric Munden) for graciously assisting with awards for our winners.
Barber, Mont., September 23
Judges: Isaiah Todd and John Todd
OPEN SHOOTING DOG - 5 Pointers, 2 Setters and 1 Brittany
1st-TOUCH'S WHITE ROSE, 1682250, pointer female, by Touch's Big Whiskey-Touch's Lemon Drop. John McIltrot & Alex Rickert, owners; Alex Rickert, handler.
2d-SWEET GRASS SKEETER, 1693872, setter male, by Sweet Grass Slim-Seranoa's Glimpse of Glory. David Huffine, owner and handler.
3d-SERANOA'S REBEL MARGUERITE, 1680865, pointer female, by Rebel Stoke-Seranoa's On Guard Annie. John Hudgens, owner and handler. 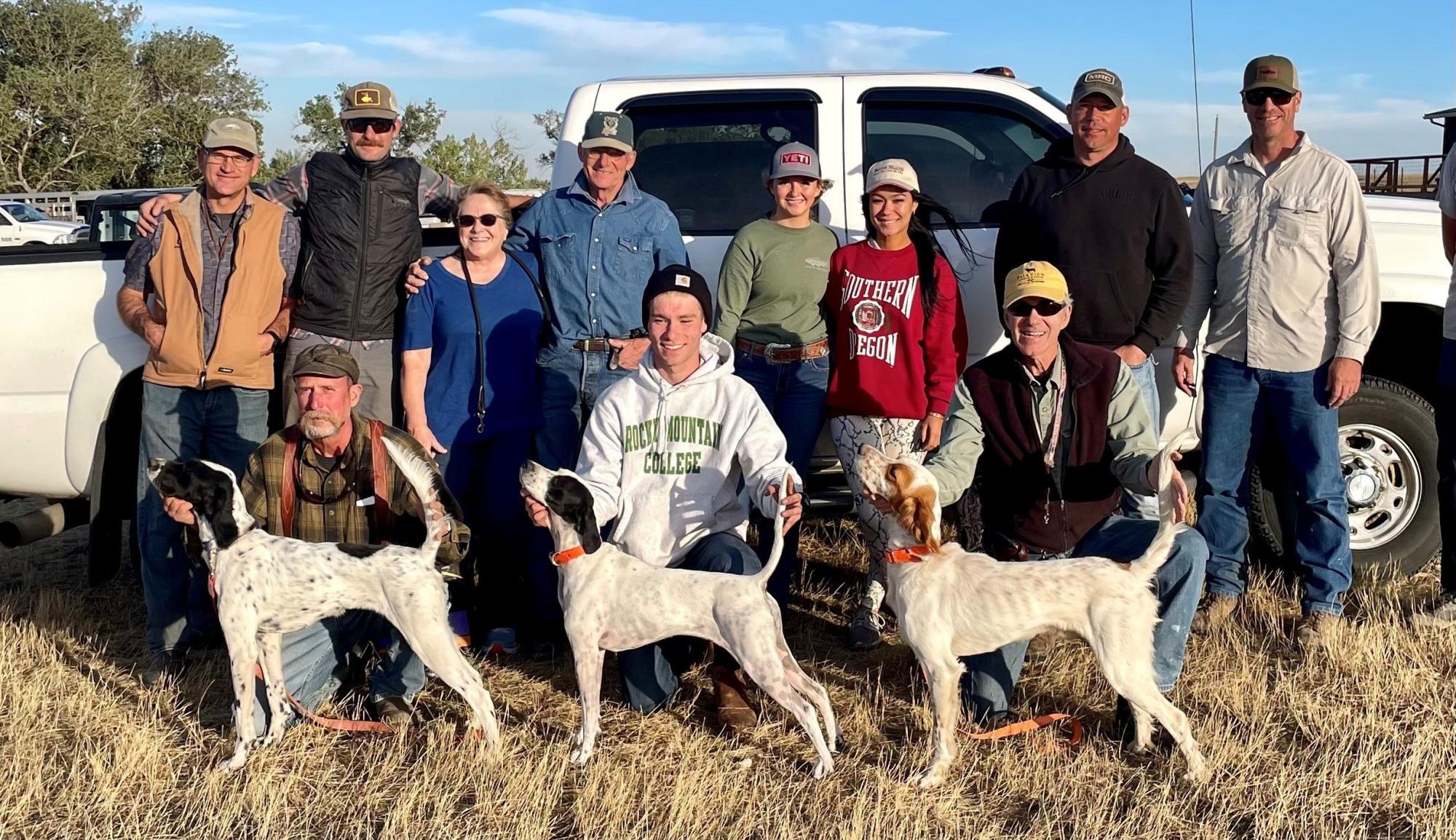 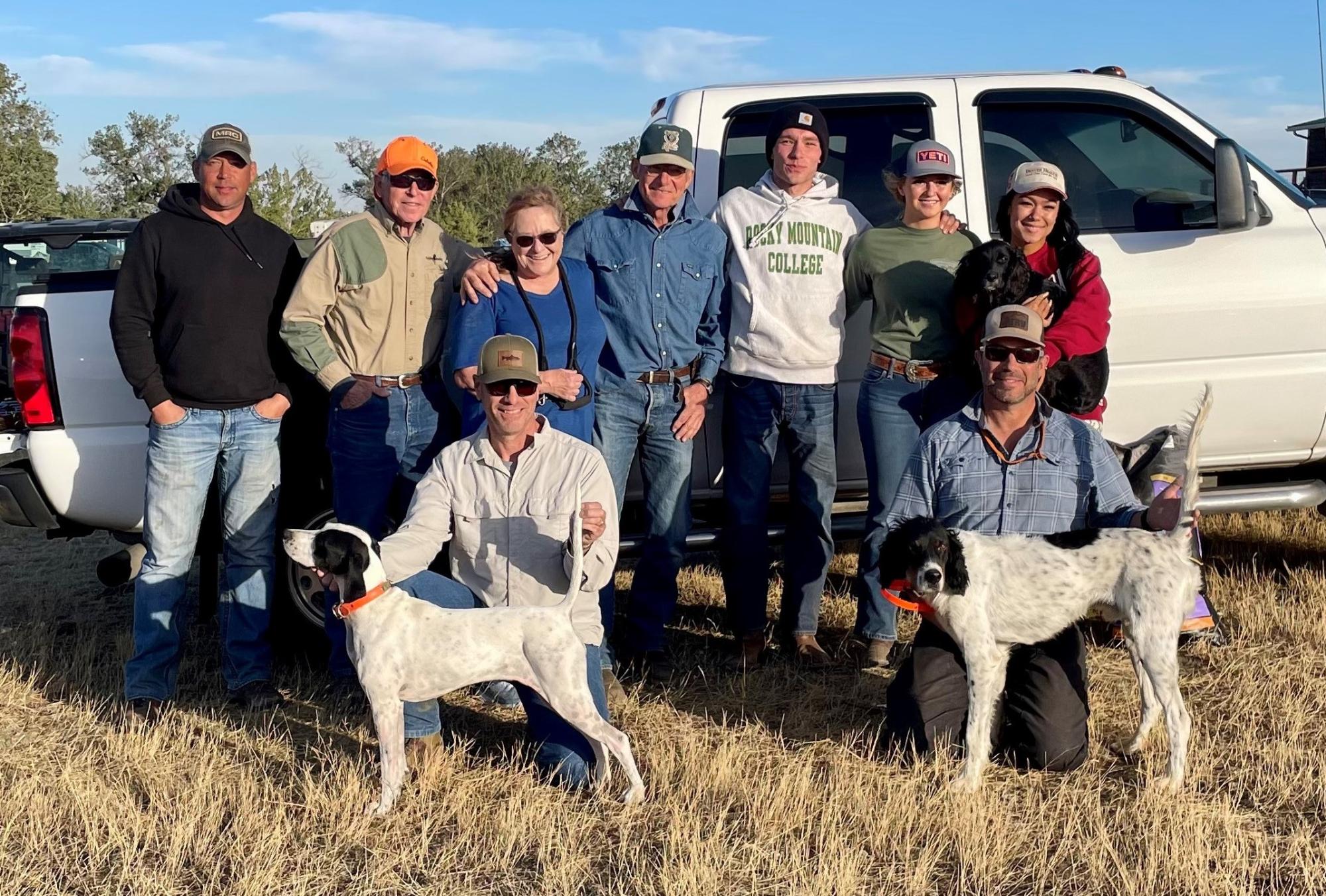