As the saying goes "It ain't over til the fat lady sings...."

In the last brace of the trial, Double Deuce Sage, a classy and determined pointer female with Doug McMillen, Jr., and Backcountry Missy, a fancy and fast pointer female with Chris Catanzarite were let loose at the starting line. Sage was the first to strike with a stop at the end of breakaway left. No bird was produced, and she was moved forward. Her travels took her along the left treeline and down to the tall grass corner where she went right and just past the duckblind to the right and catching up with Missy. Missy was tending to her own find when Sage came in and backed. After the flush and shot, they both went further up the ditchline and east, Missy scoring again with Sage backing, all in order they were moved on. Both dogs headed to where they were able to show some footwork, crossing the ditch, on around the oil pond corner, along the treeline to the point, right and on up the hill to the tower. Missy ran hard, covered ground, and pointed on the tower left cover with Sage nicely backing. Then it was off to the top o' the hill where Missy went deep right towards the Amish barn side, Sage going left, Missy finding and pinning a limb find bird in the woods. Once again, all was in order and she was cut free to show her stuff, running down the east boundary and across the mound area and onwards along the left ditch. Both dogs after rounding the clubhouse turn split up and began hunting the big bottom as they swung towards the platform. Sage came to a halt north of the platform for a good find, steady to wing and shot she completed the task. A scout was dispatched just before time, and Missy was found standing lofty after the bell rang in the woods off club house road. The hour was up, and Backcountry Missy was put into the history books.

Brace nine of the championship broke away at 8:19 on the second day of the renewal. Waybetter Butch a mature and well applied male Pointer with Dave Park was braced with Rampo Mountain Doc a classy Pointer Male with Robert Ecker. The weather was cold and both dogs went deep from the breakaway. Doc going long and right, Butch going long and left. Waybetter Butch was found standing at 8:25 on the breakaway end left and Park went into flush. A bird was produced, and all was in order. Butch was loosed to the dense treeline and left, down the hill to the tall grass corner. Withing just a few minutes, Butch was pointing again, with Doc coming in and around to a good back. No bird was found at home, and the bracemates were moved on. Running towards the right hillside and east, both dogs independently were stopped, one of them below the platform and one closer to the right side of ditch. With all in order, both finds were written into the book. The two ran big for the next fifteen minutes, covering the ditchline, the clubhouse turn, along the woods to the point and up to the top o' the hill. Butch was found standing on the left cover with Doc backing and both looked great. Butch was relocated and Doc moved on. Butch pinned his bird and Doc came around to back. When they were released, Doc screeched to a halt and Butch returned the backing favor. Butch scored one more time behind the mound and both dogs were given their heads and were able to show their running skills from the mound to the clubhouse turn going right where they shared a divided find. Another five minutes on the ground and Butch was pointing once more with Doc backing. They were cut loose, and both finished the hour.

The backdrop to the trial is the Oakridge Bird Dog Club in Harrisville Pa. Oakridge has for some time now been available to the Pennsylvania clubs that recently held The National Walking Shooting Dog Futurity and U. S. Complete Mid- Atlantic Regional Championship. The Mid-States Championship is the third leg of the Triple Crown held this year. After an unusually warm spell, the temperature dropped, and cold rain set in, the weather stayed cold for the rest of the trial and most went from shorts during the Futurity to long pants, knitted caps, gloves, hooded sweatshirts and rain suits for this championship. Mud prevailed in the otherwise normal wet spots and the hills became steeper as the weather became colder and wetter.

The Mid-States trial is headed by Secretary Tom Mains and twenty-eight dogs were drawn to compete. The trial was held April 27th and 28th. The birds were plentiful as Tom and his two son's Dominic and Joseph took on the bird planting duties.
Judges for the trial were Scott Forman of Plattsburg and Jeff Phelps of Rochester, both from the great State of New York. They are long time outdoorsmen with plenty of experience raising, training, and handling championship caliber competitors. They fought off the wind, cold and rain, ever daunting and holding their positions. A couple days in the saddle under those conditions are enough for anyone. The judges also noted that there were several other good performances. The judges are to be honored for attentiveness and the giving of their time. 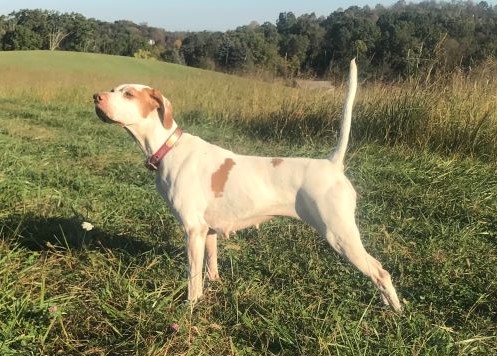