The 42nd running of the Kentucky Open Shooting Dog Championship had been rescheduled from November, 2021 until March 8, in an effort to draw three pro handlers necessary to qualify for Purina Pts dog of the year. Our efforts were not successful two pro handlers entered our rescheduled postponed championship, Doug Ray, Waynesboro, Ga., and Matt Basilone, Pittsgrove, N. J.

Runner-up Little More Shine, female Irish setter, owned by Tim and Kristine Hammons handled by Tim Hammons, was released from the clubhouse in the last brace of the trial. Shine was found on point by scout Kris Hammons on the left side of the Dewey Bottoms, woodcock was right in front of her. Catching the front both dogs were found in tree line before he Burnt Barn nothing found initially bird was seen eventually on relocation. Both dogs making large swings in field behind Gravel Hill. Little More Shine takes the right edge and is found pointing into a thicket. Another woodcock is produced. Only seen once on the back side of the No. 1 course and was missing then found pointing by scout in clump of bushes near the course path where a woodcock was produced. On past the sow pond Little More Shine was missing again a search by scout and handler found her pointing on the all age side of the course in a grove of saplings another woodcock was flushed by handler. On to the front Little More Shine was found pointing just before time at the Round Woods. A nice covey of quail flushing ended her strong forward hour.

Gratitude to the two judges Scott Kermicle, Dawson Springs, Ky. and Arnold Hall, Morristown, Tennessee. Their diligent observation and rainy days in the saddle were exemplary and appreciated.

Our sponsor Purina make the standards held possible with their donation of Purina Pro Sport dog food to the winners, jackets and hats to be embroidered for the Championship. Thank you Greg Blair for always coming through and continuing to help us.
Charlie Turner dove our dog wagon, complimentary meals were provided in the clubhouse and breakfast items/refreshments were available for all participants provided by the Kentucky Field Trial Association.

Field Trial Chairman, Matt Pendergest, oversees the mechanics of the championship. Acquiring judges, holding the drawing, composing the ad, marshalling the braces, and insuring details are attended to are a few of the many responsibilities behind the scenes. Officers of the Association expend hours of time necessary to hold a good field trial. It's a thankless work taken for granted that a trial magically happens.
Thirteen dogs were entered in the Derby.
All winning placements of the Open Derby were judged on ground work. Walden's Ridge Slap Shot, pointer female owned by David Steele, handled by professional Doug Ray placed first. I'm Spartacus, male pointer owned by Harold Ray and Jeff Ferebee, handled by Doug Ray placed second. Third place went to Hot Rod Ricky Joe, male Irish Setter, owned and handled by Tim Hammons. 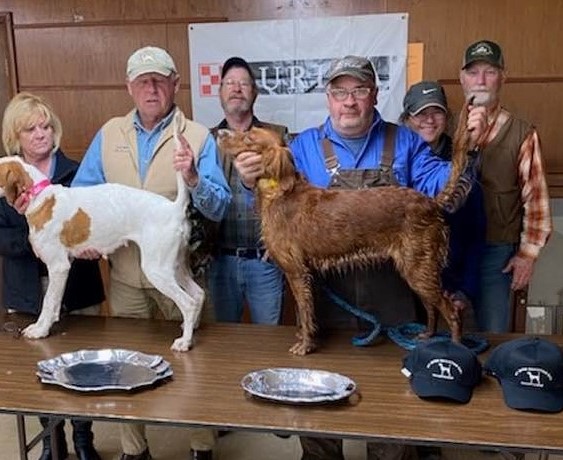