The inaugural running of the Shenandoah Open Puppy Stake was held Sunday March 13 on the impeccably kept grounds of Shenandoah Plantation in Union Springs, Ala. A chilly but sunny day, the lovely grounds were the stage for 18 eager pups. Twenty-one were drawn, but we had three scratches. Graciously agreeing to judge were Hunter McDuffie and his daughter, Addie, from Cecil, Ala. Many thanks go to our host, Dr. John Reardon, for opening the lovely grounds of Shenandoah for this event. Shenandoah has been the venue for youth trials for many years, the most recent being held just the day before. The youth trials have always been a great success, bringing many new faces to the youth trial world, and we appreciate Dr. Reardon's support.

The first brace turned loose at 10 am with Easy, pointer male owned and handled by Wayne Pope, and Rex, pointer mail owned by Roger Key/Alan Atkins and handled by Roger Key. Both dogs put on a fantastic forward ground race and handled like a dream through the hills and bottoms. Rex had a find and the end of the 20-minute brace and looked magnificent as he stood stately as a statue as birds flew all around, watching Roger for his next move. Easy made a respectful pick up for his handler as the brace ended.

Brace 2 was up with Quail Roost Tipatina, pointer female, owned and handled by Susan Wells, and Fred, owned and handled by Braden Renfroe, a youth trial star. Both dogs raced across the pond dam unbothered when 6 geese flew up and into the water. They did not have any bird work but put on an excellent performance.

Brace 3 included Rhett, a pointer male owned and handled by Braden Renfroe, Quail Roost Gypsy, pointer female owned and handled by Susan Wells, and Chip, a pointer male owned and handled by Michael Kennedy. This was the first brace of the day that included three dogs instead of two, and it made for an exciting breakaway. Chip made a beautiful and lengthy cast down through the bottoms and listened to Kennedy very well but finished behind. Rhett was very well mannered and attentive, always looking for Braden for guidance. Gypsy also made a good cast coming from behind a time or two, but was attentive to Susan and found her way back to the front with no problems. Again, the brace ended with no bird work but good performances. At the conclusion of brace three there was a welcomed break for lunch. Selena Moorer's signature chicken pot pie and sides were perfect on this chilly day.

It was a fun day and enjoyed by all. Each of these pups showed potential and have promising futures. Many thanks to Dr. John Reardon for opening his beautiful place to us and to Robert Moorer for keeping everything running smooth and on time. Kudos to the rest of the Shenandoah staff for being so hospitable. Gratitude to our judges, Hunter and Addie McDuffie, for taking the time to judge and give much appreciated and cherished feedback. These young dogs proved that the future is bright for the sport, and that's what it's all about.
Union Springs, Ala., March 13
Judges: Addison McDuffie and Hunter McDuffie
OPEN PUPPY - 21 Entries
1st--REX, unreg., particulars not given. Rodge Key & Alan Atkins, owners; Rodger Key, handler.
2d-EASY, unreg., particulars not given. Wayne Pope, owner and handler.
3d-Doc, unreg., particulars not given. Todd & Ella Grace Montgomery, owners; Robert Moorer, handler. 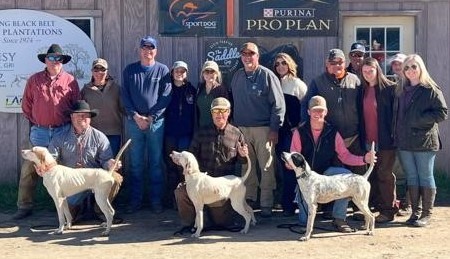