We begin coming off a great trial in Booneville, Ark., at the Blue Mountain SEU Facility. The Eastern Regional Championship was held two weeks earlier at the same location. The weather was completely different for the Free-for-All. We had snow two weeks earlier. The National Free-for-All had cool mornings warming up in the afternoon but remained good dog running temperatures. The call-backs ran on Saturday afternoon warmed up considerably to the mid-eighties.

We have to acknowledge all the work and help that goes into a trial. The AF&G along with a group of dedicated volunteers that do a great job for all the effort year round making these trial grounds what they are and mean to our sport. This event was originally scheduled to be held at Camp Robinson, Ark. Due to the Camp Robinson's management not mowing/shredding, disking, selective management planting, and staff saying they were going to burn effected the original location having to be moved. Camp Robinson for many years was premier spot for one of our National Championships. We moved it to Blue Mountain because the Booneville, Ark., location was in tip top shape. We all need to be thankful for those States who do allow and manage grounds for our sports venues.

There are so many more folks to thank for their help and support. Not sure to thank who first but all are important to make this and many other events a success. The West ARK BDC including Glenn Cumbie, Jerry Oswald, and Steve Morgan for their time and equipment. They helped keeping the trial moving with planting birds, dog wagon, getting dogs & handlers to the line. To our Sponsors: Purina Pro Plan Sporting Dog, Park Cities Quail Coalition (PCQC), Garmin Products, Mule Brand Clothing, Coyote Leather Company, Gun Dog Central, Gun Dog Supply, OnX Hunt for your continuing commitment to the NBHA. These are the best Sponsor's anyone could be associated with. We all need to reciprocate to them with our patronage. We can't forget Judi Tipton and her crew for the wonderful lunches and evening meals and Glenn Cumbie for the morning donuts (he was accused daily for hording them). Also need to thank my wife Melissa Sauer for helping host this with us. She had to miss out on a bachelorette party for our future daughter-in-law in Nashville, Tenn. The sacrifices she's made for me over the many years me being involved hosting and competing in field trials with her birthday (Feb. 14th), our anniversary March 12th, and many more dates she's sacrificed for me.
Our Judge's for this event were Harold Woodward from Volonia, Ark., and Shawn Rowan from Cypress, Tex. They were 110% tuned in for their assignment and great dog men of their own.
They were presented Christie Enterprises halter/bridal headstalls and green Mule Brand Clothing jackets sporting the NBHA and PCQC logo's for their help.

First Series: I'm going to take a best pass at covering as much of the play by play but I made a huge mistake not hiring or recruiting a reporter. Besides having a few of my own entries and not being able to ride every brace (a little horse poor) may have left a few holes in this report. Some of these note had to come from the Judge's Books and not all from my notebook. Day two of the first series is missing a few play by play descriptions and I truly apologize. The handler's names are listed first and the Owner's if different from the handler are second.

THE RUNNING
Indian Creek Courageous Cat (Garry Malzone/Ed Marron) and Jimfork's Black River (Steve Morgan/Glenn Cumbie). Hawk had a find at 8 with Cat coming in for a back, they both scored a divided find at 14, Hawk scored again at 17 and 21 with Cat backing again at 21 to Hawk, Cat had a stand at 31 and was a difficult stand of brush to flush birds out of and Garry elected to take an unproductive. Hawk was found standing again at 44 but scored an unproductive but also was found standing at 54 and all in order. Cat scored finds at 48 and 56 with birds. Cat's race was more forward and searching with Hawk's ground race a lot more handy but all forward.

Emert's Grouseridge TT (Zack Erne/Dave Emert) and K C's Buzz Saw (Ken Sauer). Buzz found standing at 14 and TT backing all was in order, at 22 Buzz score an unproductive and at 42 and handler elected to pick up when both dogs were a little too loose. TT score finds at 22 and again at 31. TT also picked up at 42./

JoJo's Dark Knight (Justin Crook/Lance Gardner) and Indian Creek Bocephus (Garry Malzon/Ed Marron). Knight made a couple of casts to the rear early and Justin pick Knight up early. Bocephus had the course to himself and ran a nice forward race. Bo scored finds at 13, 21, 35, 40, and 55 all with impeccable staunchness.

This ended Day #1 morning braces and we broke for lunch.

Jimfork's Sunny Hawk Girl (Kenny Snow/Glenn Cumbie) and Georgia Born Braveheart (Samuel Ridings). Casey was off and brought Kenny back a bird at 9 and was picked up. Luke ran a nice forward race but no bird work and was picked up at 48.

Gun's Pistol Pete (Justin Crook/Colby Tackett) and Erin's Deja Vu (Garry Malzone/Joe Link). Bess scored a find at 15 with all in order. Pete was picked up at 17 not doing the job Justin was needing or looking for with his ground race. Bess ran a nice forward race and scored additional finds at 17, 27, 42, 50, and 58.

Caird's Lefty (Samuel Ridings) and Sho Me Mo Tu (Zack Erne/Dave Emert). I was unable to ride this brace but was informed neither do finished. Apologies to the Owners & Handlers.
8) "Sue" (Bob England) and Griff's Valiant Skipper (Justin Crook/Mike Griffin). Skip started off the brace with a find at 8 and Sue coming in for a back. Sue scored at 12 with Skip coming in for a back. Sue had a relocation and all good through the shot. Skip was picked up by handler at 20. Sue scored finds at 22, 27, & 35. At 35 Sue put a bird in the air and was picked up.

Unfinished Business (Justin Crook/John Gaines) and Jimfork's Staple (Steve James). Business start off quickly out of the gate with finds at 7 and again at 12. Unfortunately he moved a bird on the next find and was picked up. Bo's race was unrecorded by reporter but did not finish.

K C's Guitar Man (Ken Sauer) and Emert's Sho Me Mo (Zack Erne/Dave Emert). Zeke impressed the Judge's with his forward casts and fluid gait. Zeke had a find at 7ish with all in order. His next find he decided to catch on in flight and was picked up. Mo's brace was unrecorded but also did not finish.

Mr. Tin Man (Kenny Snow) and Blackjack (Margie Ridings/Samuel Ridings). Tin Man brought a bird back to Kenny at around 8 and was picked up. Jack's brace was unrecorded but also did not finish.

Pure Confidence (Garry Malzone/Black Meadow Kennels) and Pineview Sally (Justin Crook/Jay Hernsburg). Tango was described by the Judge's as a hard driving forward race with impeccable manors on his game. Tango scored finds at 12, 21, 34, 43, 46, 51, and again at 57. Sally's brace was unrecorded but also did not finish.

Maggie (Klaus Schmitt) and Fast Money (Justin Crook/Bud Moore). Maggie had a good solid run. She had a stop to flush at 6 and another find at 22. This was just not enough to move the prior contenders. Money's brace was unrecorded but also did not finish.

So with Garry Malzone having all four call back dogs each brace he had to himself. This was run on Saturday afternoon and the weather was warm. There was plenty of water on the horses and in creeks and ponds to keep the dogs cooled off. Two dogs we considered call backs and two dogs were considered stand-by's.

Pure Confidence (Garry Malzone/Black Meadow Kennels) was up first. Tango started off with a nice find on the breakaway edge at 4. The birds were way out front of him and stood handsome with an extended flush. Racing off to the front he was only stopped at multipul finds at 12, 15, 22, and 31. As he was able to race forward finally got a 10 minute stretch to show his speed and range only to be stopped again at 41, 44, and again at 49. After crossing Lick Creek in the open edge pasture had his last find on an edge of cover at 59. Job was well done and also the warm temperatures showed his strength.

Indian Creek Bocephus (Garry Malzone/Ed Marron). Bo made a big cast to the front and was seen at 14 at a creek crossing gap where found standing. The cover was extremely thick. Birds were seen by handler and scout but not the judges. Garry made an exhausting effort to flush the birds but the birds did not cooperate. Handler elected to take the dog on. At 20 Bo was found standing and all in order. After this find Bo was gone for too long and the tracking collar was requested.

Erin's Deja Vu (Garry Malzon/Joe Link). Bess was up next with a find fairly quick out of the gate at 8. Racing back to the front she scored another find at 14 all in order. Then came a period where she was able to show her speed and range and not scoring again until 31. The came another string of finds at 36, 41, 46, 49, and again at 59 where time was called. 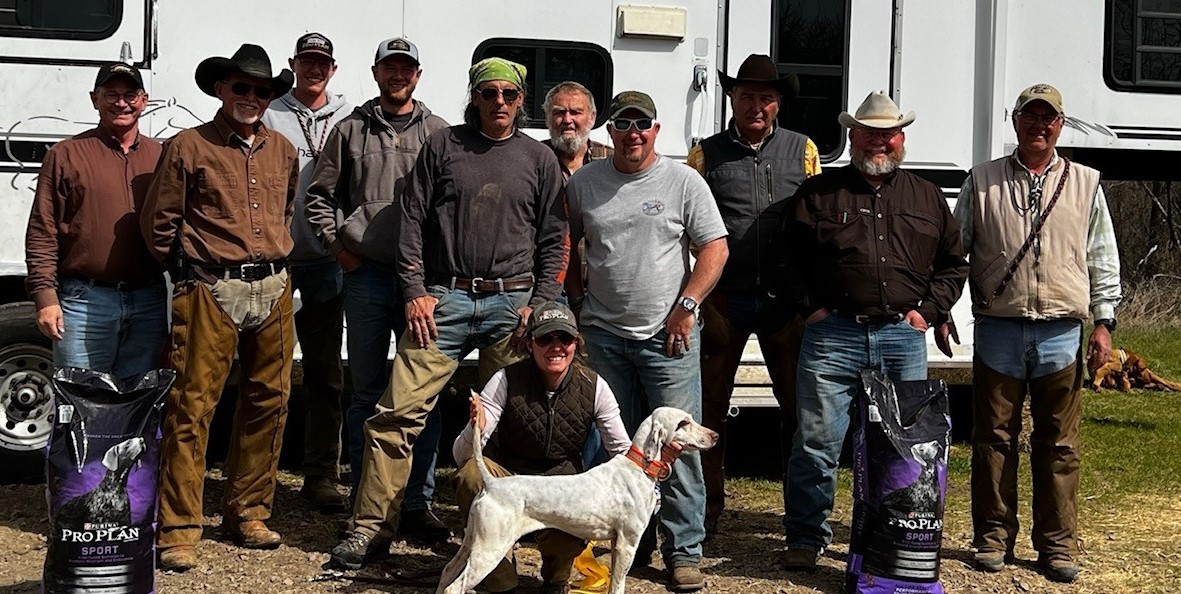 Dark Rum Jasmine (Steven Burris) and Maumee Jules D L (Kenny Snow/Jerry Snow). These two youngsters have class runs. Both dogs were noted as having forward races with bird contacts and were rewarded with placements.

Jimfork's River Dot "Dot" Kenny Snow/Glenn Cumbie and K C's Dominator's Pat (Ken Sauer). From mine and only my prospective as being a handler in this brace is where my comments come from and a comment from the Judge. Both young dogs took flight to the front with speed and a mission. At the first turn to the east Pat went back to the north with handler having to send a scout to collect her back to the course heading south. Dot continued on course with handler getting ahead of myself & Pat. Scout indicated that Pat had got on a covey and finally came around catching up with Dot and Kenny Snow. Per the Judge Pat had a find (without handler). He indicated that Pat stood erect and dropped her suitcase waiting on handler until Dot came in and the pressure was too much for a young un'. Both dogs finished to the front. 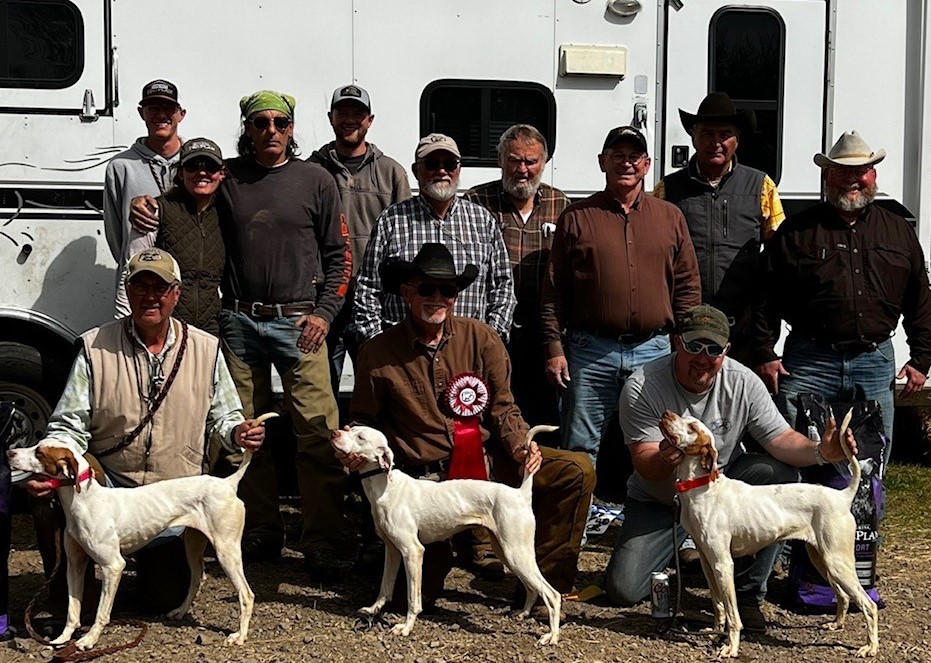 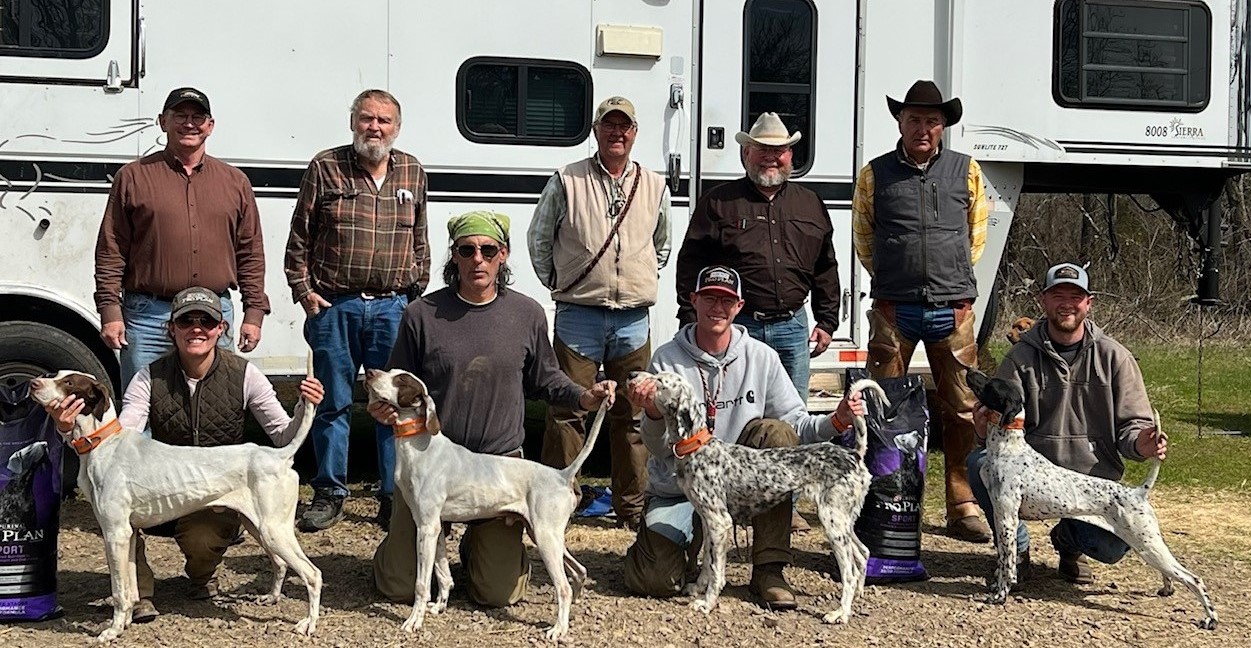